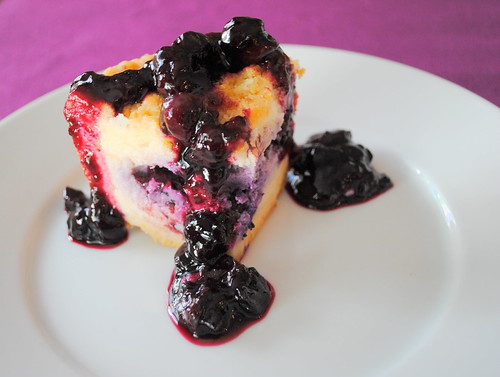 Cheesecake is one of the few desserts I actually go out of my way for. I kind of really love cheesecake. And this cheesecake is delicious. Using ricotta instead of traditional cream cheese really makes the cheesecake seem both rich and creamy, but without the heaviness cheesecakes normally have. I also think that the blueberry and lemon flavors really help keep the cheesecake feeling light and summery almost. I think a fruit centered cheesecake is much more appealing in the summer than something super rich and chocolatey.

Definitely make sure you let these cool overnight! You cannot skimp on the cooling time with these ones. But trust me, it’s totally worth the wait. The blueberry and lemon flavors really, really develop and get nice and friendly together the longer they And since this cheesecake is cut up into bars, it makes a great dessert for picnics, barbecues or when you need a portable dessert (obviously leave the blueberry sauce off to keep it clean and portable!). 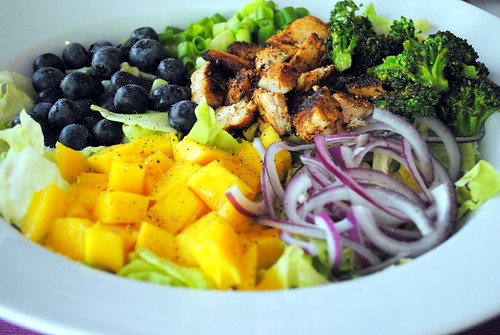 This salad has it all; sweet, salty, cheesy, and all delicious. Mango, blue cheese and broccoli are some of my favorite foods, but never in a million years would I think of combining them. Ever. But somehow, it totally works. The flavor combinations definitely make for a very unique meal.

I definitely plan on making this salad again, but next time I think I might add a couple of other things to make it even better. Adding some toasted cashews or almonds would add a great crunch to the salad. I could also imagine substituting the chicken for shrimp (maybe even coconut shrimp for more of a tropical twist). 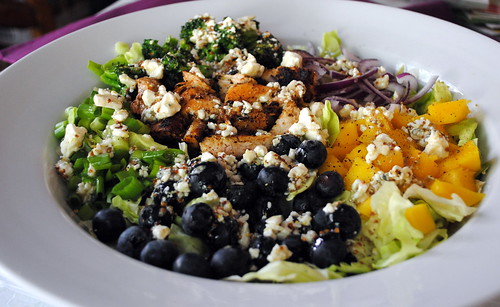 I think this salad is a perfect for any 4th of July picnic or barbecue. Not only are the colors fun and spot on for the holiday, the ingredients are absolutely fantastic together! The salty blue cheese, earthy quinoa and sweet blueberries each bring great flavors that manage to complement each other perfectly.

I used balsamic raspberry vinegar, which unfortunately muddled the color of the quinoa and blue cheese a bit. I know if I used a little vinegar (white wine, cider) the color would be perfect. I also found the raspberry balsamic to be a bit too sweet for my personal taste. The tangy blue cheese helped tone it down slightly, but I think I would try a less sweet vinegar next time.

This is one of the easiest and most refreshing desserts you will ever make. The dessert reminds me of the magical summer I spent studying abroad in Cambridge. It’s light, airy and screams of summer, but it is also the perfect no-bake, in a hurry dessert. The meringues make the cream absolutely amazing. The berries and the cream are great, but add in the meringue, and it gives the dessert the best type of contrast.

I made this with both thawed frozen blueberries and fresh ones. The frozen definitely worked better. The juices that form as the berries thaw out, definitely make the dessert all the better. Any berry will work this dessert, so feel free to go wild.

I’m not too big on desserts, but crisps would be one of my favorites. They are so easy to make, but seem like the could be kinda complicated if you don’t know  any better. If you stick them in ramekins, they make perfect individual desserts for guests or you have perfectly portioned desserts for a few days.

I threw all this together in about 5 minutes and it took about 20 minutes to bake. We had three pears that were about to go off, so I peeled them, cut off the gross bits and was able to fill 4 standard size ramekins. This could easily be made gluten full or gluten-free. I used Bob’s Red Mill Quick Cook Oats and Gluten Free All Purpose Baking Mix, but regular quick cook oats and all-purpose flour would be just fine.

You can also serve these with whipped cream or vanilla ice cream, but we didn’t have either in the house. They were still delicious without.

This recipe seemed so incredibly simple, but soon as I set about making it everything went wrong…

There was a near incident with these two… They used to be neighbors in the cupboard, they now live on separate shelves.

Then the ice cream maker that I rediscovered in the garage decided it was time to throw in the towel. Just because you haven’t been used in, like, 10 years does not mean you can decide to crap out on me when I actually need you. Rude…

Then there was was some cursing, accompanied by the requisite wailing and gnashing of teeth. And then Mama CC stepped in. I have a theory that has yet to be disproven; everything, both living and inanimate,  in this house lives in a state of combined awe, fear and love of my Mama. Me, my dad, the dogs, uninvited bugs, kitchen appliances… She just has an affect on us.

And just as I was contemplating buying a new ice cream maker on Amazon, Mama CC got it to work. I swear she’s a miracle worker.

After some quick churning, this mix was ready for the freezer and a mere 3 hours later a delightful dessert was ready for eating.

The original recipe called for sour cream, which we apparently just ran out of… Oops. So, I used greek yogurt instead. The ice cream turned out great.

In a medium saucepan, combine blueberries, sugar and lemon juice. Heat over medium heat until mixture starts to simmer. Stir untill the berries start to pop an release juices. Remove from heat and puree with food processor. Add cream, yogurt and vanilla. Pulse to combine. Place mixture in fridge for 1 hour. Then add to ice cream maker. Blend and freeze according to maker instructions. Then freeze for 3-4 hours. Serve and enjoy!

With summer here and lots of hot weather in the future, it’s time to turn to cocktails that are light and refreshing.

I wanted to try put a new twist on one of my favorites, Stoli Blue and soda. I’m sure vodka soda’s really do it for some folks, but I find them pretty boring, but blueberry flavored vodka gives it a little extra something. It provides flavor without being sweet, which is what I love. We have a ton of mint growing around here at the moment and I had a lot of blueberries, so I thought I might try to make a blueberry flavored, mojito inspired type of thing.

I muddled the fresh blueberries, mint and vodka in the glass. Stirred. Added ice and topped with sparkling water.
I think next time I would try to make it more ‘mojito’ like than vodka soda like, by adding a dash of simple syrup and probably some lime juice as well.