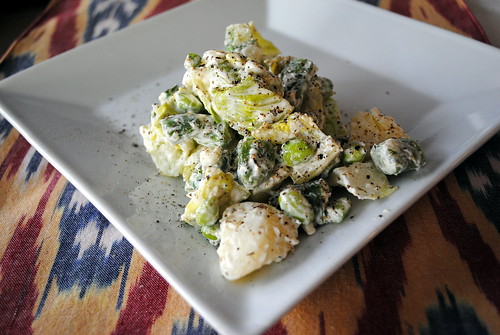 So, I briefly mentioned yesterday, I am moving to the other side of the country in 27 oh, so short days. I’ve been hell bent on getting in as many of my favorite summer things, California things, and summery California as possible. I have lists of food, shops, cities, friends, beaches, parks, drinks and many more random things.

A couple of weekends ago I got to cross a whole bunch of things off my list with a trip up to San Francisco. There were friends and food and shopping and pugs and crafts and it was glorious. Apart from the fact that many of my best friends live in San Francisco now, it’s always been one of my favorite cities. There is so much to do and see and, most importantly, eat! This salad is inspired by one I had at Delica many, many trips ago. Delica is a great Japanese deli and sushi bar in the Ferry Building. And while a Japanese deli might seem like the last place you would find an amazing potato salad, trust me they definitely know what they are doing. 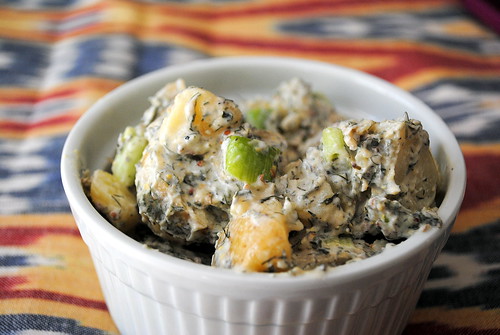 It’s already getting warm here. We had approximately two days of rain and a maybe four cold-ish (by Southern California standards) days and we are apparently heading right back into summer. I’m not a fan. The only plus side is that I now have a legitimate reason to insist on barbecuing as often as possible. I was all set to grill up a delicious meal the other day and it turned out we had no propane left, which is kind of a major component to using a gas grill. Memo to Self: always check for propane.

The meal was not a total loss because I had made some delicious side dishes to go with the barbecue. This salad is probably going to be in regular rotation over the next few months around here. It’s a very easy to make and very delicious. I originally used white balsamic vinegar in my dressing for this salad, but I honestly thought it turned out a bit too sweet. I think apple cider vinegar or white wine vinegar would be a much better match. I used dill in the potato salad because it had a ton on hand, but you could use just about fresh herbs you have on hand. Parsley or basil would be great and I think arugula really would be great too.

Look beyond the Irish Beef Stew and let’s talk about the potatoes. I’m Irish. I love potatoes. I’m basically a potato expert. While I have nothing against tried and true, plain mashed potatoes, sometimes you just need to spice things up a bit. I like horseradish quite a lot and horseradish is quite nice with beef dishes. I knew I was going to like these, but I was very pleasantly surprised about how well the horseradish went with the stew. The horseradish really brought out the best of the flavors on the stew. I think these potatoes would be the perfect side dish to any St. Patrick’s Day meal

Um. This might be one of the best ways to serve potatoes I have stumbled across. I’m Irish, I am basically an expert on all things potato. So, if I say these are great potatoes, you can rest assured that these really great potatoes. And they are SO easy. So easy. They are also a great way to make multiple individual servings. These might even work for more of an appetizer orientated party.

It’s Memorial Day weekend here in the States, which means it’s unofficially summer! That means it’s now time for barbecues and flip-flops and margaritas and baseball. Barbecues require more than just a grill and some meat, side dishes are also necessary. I have to admit, I am very, very wary of other people’s foods at barbecues. Several summers ago I suffered the wrath of a mayonnaise-laden potato salad that had been sitting out too long. Needless to say, it was not an enjoyable experience. Ever since, I’ve be a fan of mayo-less options and refrigeration.

This potato salad has tons of flavor and no mayo, so it’s the perfect summer side in my dish. This is also a vegan dish. As a  former vegetarian, I always appreciated when there were tasty non-meant options at barbecues. I swear some people randomly add bacon to side dishes just to spite non-meat eaters. This potato salad should keep everybody happy. I searched and searched for a recipe that had the flavors I was in the mood for and came up flat, so I just threw together what sounded good in my head and hoped for the best. I like really strong and tangy flavors, so the combination of capers, vinegar and lemon juice was perfect to me. I also only used 3 tablespoons of oil, since olive oil isn’t my favorite flavor/texture. If you think the capers and vinegar might be overwhelming, slightly upping the amount of oil should help balance it out.

After my first adventure with salt and vinegar chickpeas, I decided it was time to venture other foods. Salt and vinegar potato chips are probably my favorite flavor. I love how tangy they are. I figured salt and vinegar potatoes had to be pretty good as well. These definitely have a much mellower flavor than potato chips. They definitely absorb the vinegar flavor, but it is not as overpowering or overwhelming as a bag chip might be. Even if you aren’t a fan of the chips, you might find these enjoyable.

The shrimp! That’s what this dish is called at my favorite Irish pub in Santa Barbara (Dargan’s). Dargan’s is definitely a favorite meeting spot for me and my best friend Jessica. We have spent many an hour chatting away over pints there. The shrimp is one of my go to dishes if we happen to be grabbing dinner there (their black bean burger is pretty amazing as well). Well unfortunately, Jess and I have been busy ladies lately and we haven’t been to Dargan’s in a while, but I had a hankering for the shrimp, so I tried my best to recreate the meal at home. It’s not an exact replica, but it’s pretty close and just as delicious.

For some reason I had never thought to combine mashed potatoes and shrimp into one dish before having it at Dargan’s. The two never seemed like a combination that would work all that well. I was definitely wrong about that. Quite frankly I should have known better; obviously two of my favorite foods are going to be amazing together…Obviously.

So, I decided to disappear for a while. I went up to San Francisco for my best friend’s engagement party. It was a great trip filled with many friends, parties, Napa wine tasting, Czech bars, dive bars and couch surfing. I love San Francisco; it’s always been one of my favorite cities. The fact that several of my favorite friends only makes every trip there even better.

Garlic fries always remind me of San Francisco. It might seem like a random association, but if you have been to a baseball game at AT&T Park (wonderful park, god-awful baseball team), you have probably smelled the scent of garlic wafting through the air. The garlic fries there are pretty close to perfect.

I made these fries in the oven. Fries from the oven can sometimes be a soggy disappointment and since I love my fries super crispy, I usually find them to be more trouble than they are worth. Luckily, moving the rack in the oven means that these came out super crispy. Some were even a bit too well done, oops. Between the garlic on top and the seasoning on the fries, they were full of flavor. I think they are best served with plain old ketchup or an aioli (can you tell I have a serious garlic problem yet?).

This is the second part of my buttermilk frenzy. I originally intended this to be a potato salad to go with my oven-fried chicken so I could have a summery, picnicky type of meal, but I kinda, sorta, accidentally forgot that the potatoes were on the stove and they decided they wanted to be mashed as retaliation. So mashed potatoes they became and damned good ones at that. I feel like buttermilk and dill are just meant to be together. They complement each other so well. Those two flavors with the horseradish added in really made these mashed potatoes great.

What’s not to love about potato pancakes? Being the first day of Hanukkah, making latkes seemed appropriate. These aren’t your ordinary latkes though. When I saw cilantro, jalapeño, chipotle and potato all together, I knew I was on to a winner. The potato helps keep the spice factor down, but doesn’t hide any of the flavor. I actually added extra chipotle to the sour cream, since I found the sauce and latkes a little too mild for my taste.

Latkes are fairly labor intensive with a lot of grating and waiting involved, so be prepared to put in a little effort. These are definitely worth it. I think they would be a fun change from a plain latke for any Hanukkah dinner or pretty delicious any time you want to change up your potatoes.