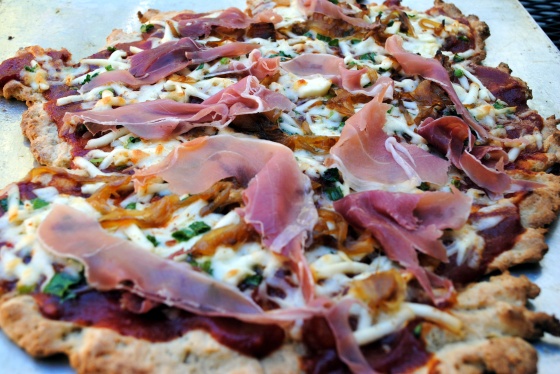 So, a little while ago, I had quite the conundrum to deal with. I had a craving for Indian food, yet I also wanted pizza. The two cuisines seem to have little common ground, but luckily I found a solution, a very delicious solution.

Now, this pizza has a lot going on. I initially thought that the flavors would be too much and not go to together at all, but somehow they all work. The tomato paste and mango chutney, which were the two ingredients I had the most hesitation about, were absolutely great together. I also added some caramelized onions to the pizza, just because caramelized onions make everything better. 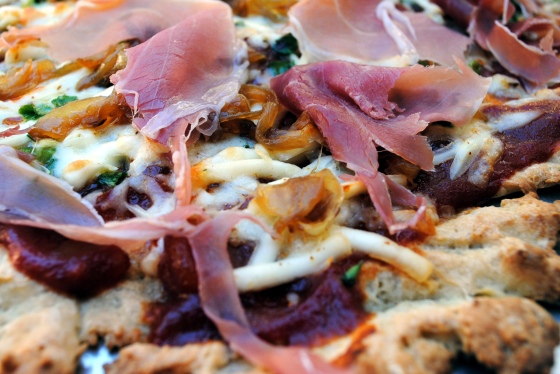 Now, let’s talk gluten. If gluten is not an issue for you, go to Trader Joe’s and buy some of their frozen naan and you are all ready to make your pizza (I recommend the garlic naan). You could probably also buy any naan, frozen or fresh, or even some large pitas to substitute. Basically any thick flat bread or pizza crust will work. If gluten is an issue, this recipe might be a little more work. I made pizza dough from Bob’s Red Mill Pizza Crust mix. It’s not really too much work, just some mixing, sitting, rising, waiting, pre-baking, waiting but it’s worth it. I know there are pre-made gluten free crusts available, but I was just using what I had in the pantry. When I had the gluten free pizza crust ready for it’s pre-bake, I sliced up some garlic cloves, sprinkled them on the crusts, brushed with a bit of melted butter and put them in the oven. This was my attempt at getting the gluten free pizza crust to be a little more like garlic naan. It worked perfectly. 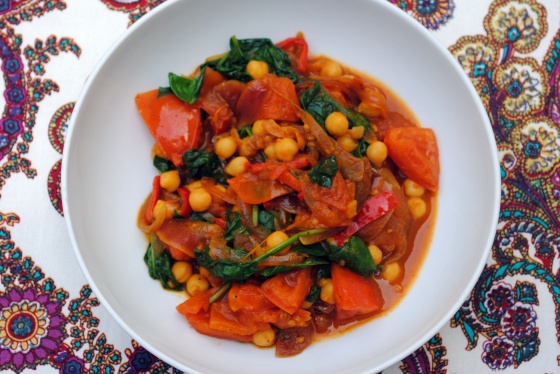 This is a quick and easy vegan curry. It’s super tasty and you probably have the majority of the ingredients on hand already. It’s perfect for a quick weeknight meal and it will make your kitchen smell amazing.

After reading some of the comments on the original recipe, I used less than the original amount of liquid called for since most people seemed to find it too watery. I also substituted broth for the water just to create a bit more flavor. If you don’t have red chiles on hand or can’t find them you could easily substitute jalapeños, bell peppers or even canned chiles.

Chickpeas with Tomatoes & Spinach (from BBCGoodFood.com)

I’ve had a hankering for London lately and the only cure, apart from a plane ticket, is some delicious Indian food. Yesterday I shared a delicious recipe for aloo gobi, today we shall move on to some chicken curry.

The curry paste is easy enough to make yourself if you have all the ingredients on hand, but if you are running short on time or don’t have all the ingredients, it’s easy enough to cheat and use a ready made sauce. I would recommend a brand like Patak’s. I used to use their products all the time when I lived in London, but I’ve been seeing it more and more stateside as well. Any grocery store with a decent international section should carry it. If you live in Southern California, I know that Von’s, Ralph’s and Fresh & Easy all carry it. 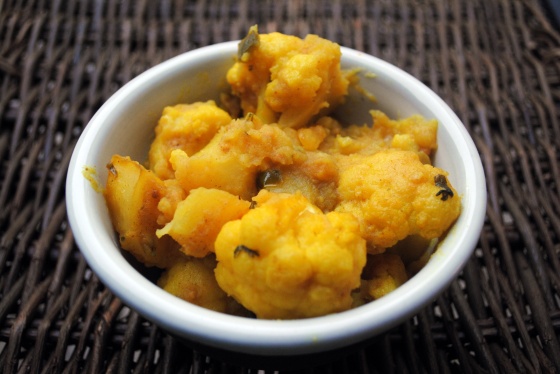 Aloo Gobi has always been one of my favorite Indian dishes. It’s usually thought of as a side dish, but it’s a proper curry in it’s own right. The combination of cauliflower and potatoes might seem a bit bland at first, but the spices really bring together a tasty dish.

I made this quick and delicious curry for lunch the other day. Start to finish, it too about 20 minutes. It would have taken less if I had read the ingredient list before hand and realized that the potato was meant to be cooked, but it still turned out to be great. I added some chopped red and green onion for some extra flavor and I also accidentally dumped in about 4 times as much cayenne as I wanted. The pepper definitely was noticeable, but not overwhelming at all.

I love chai. Love it. But not the gross stuff you get at a coffeeshop. If you have never had homemade chai, get on it. It will change your life. Slightly sweet, slightly peppery; it’s love in a  mason jar.

The first time I had chai was in India from a roadside stall that we were told to avoid, well we were specifically told to avoid all dairy, but when in India… and armed with cipro, dairy wasn’t even an issue. There is something about the dairy in India that was way better than the dairy I’ve had anywhere else. The chai was better, the lassis were better, the ice cream was out of this world.

Honestly though, the best benefit of homemade chai, is the fact that your house will smell amazing.

Chai is traditionally served warm, but if you know me in real life, you probably also know that I a  major OCD problem about drink temperature. It’s just one of those things. I hate hot drinks, I hate warm drinks, I hate room temperature drinks, I hate any drink that is not ice cold. Even when I lived in Budapest, in the middle of winter, everything still had to be iced (the only exception I made was for the forralt bor (mulled wine), but that’s totally different). And that is why my chai is iced and in a mason jar. Plus, everything tastes better out of a mason jar.

Next time I make this, I will definitely double the amounts of everything. We only got enough for a small mug for Mama CC to try and one round of my mason jar.

I’ve had a real hankering for Indian food lately. A couple weeks ago I made some UH-mazing Channa Masala and I just haven’t been able to get enough since. When I lived in London, we went out for Indian food all the time and we would go out of our way to get ingredients and spices to make Mexican food at home. Being back in California, I can get Mexican food anytime I want, but good Indian food is something hard to come by. Last night when I realized I had the makings of a fantastic Indian feast, I set about making dinner right away. 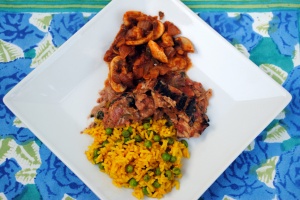 I’ve realized in my past couple Indian food making experiences, it’s not nearly as daunting as I originally thought. Actually, I’ve found Indian cuisine to be quite approachable and delicious. Tonight’s Indian feast was comprised of Chicken Tikka Masala, Mushroom Bhaji and Basmati Pea Rice.

Mushroom Bhaji is one of my favorite Indian dishes and it has been my standard order anytime I’ve gone out for Indian over  the last couple years. Mushroom Bhaji, Bombay Aloo (potato) and pilau rice. Perfect Meal! Tonight I decided to change things up with Chicken Tikka Masala. I used Pioneer Woman’s recipe and, while I can’t vouch for it’s restaurant authenticity, it was absolutely delicious. I also used the rice recipe as well.

Mushroom Bhaji (adapted from this recipe)

Heat oil in saucepan over medium heat. Add onion, jalapeno and garlic. Cook for 6 minutes, stirring occasionally. Add cumin, coriander, chile powder and salt. Stir together. Add mushrooms, water and tomato paste. Stir until everything is coated. Cover pot and reduce heat to low, and cook for 10 minutes. Stir halfway through. The dish should be stew-like. If it is not thick enough, or the mushrooms aren’t yet tender, remove the lid and cook for a few more minutes. 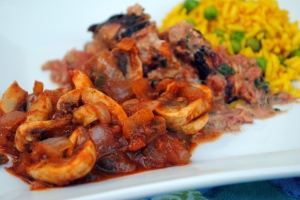 This recipe was absolutely delicious and the rice was amazing as well. My chicken came out with a lot more liquid than PW’s looks like it had, but the rice quickly helped out that situation. Also, the ‘marinade’ for the chicken, ground cumin, ground coriander and yogurt (I used greek) was amazing. You definitely could have eaten the chicken alone when it was done under the broiler.

While living in London, I naturally developed an obsession with Indian food. Sure, I’d had Indian food before in California, in Budapest, hell, even in India, but it was never something that was on my everyday radar. Well, moving to London changed all that. The first Indian meal I remember going to in London was to Preem and Prithi for Lauren’s birthday. That meal signified the beginning of the obsession. I’ve been hard pressed to find an Indian dish that can even compare. I was close to giving up. I had resigned myself to Trader Joe’s frozen Indian meals. Not bad considering they come from a microwave, but just not good.

Yesterday, while I was in Trader Joe’s, I was looking at the Channa Masala box. Despite having purchased it many times, for some odd reason I decided to look at the ingredients. Once, I realized that I had all of these ingredients at home in already, I hatched a genius idea of making my own Indian food! Best idea I’ve had all week. Maybe even all year.

Just trust me when I say that you need to make this right now. You can thank me later.

Channa Masala (adapted from this recipe)

Melt butter over medium heat. Add onions and cook until soft and beginning to brown. Add garlic. Add the coriander, cumin, cayenne, and turmeric. Stir until combined and cook for 30 seconds or so. Stir in the tomatoes. Cook for 5 minutes, stirring occasionally. Add chickpeas and broth and bring to a boil. Reduce heat to a simmer. Add the paprika, garam masala, salt, and lemon juice. Cover and cook at a simmer for 10 minutes. Serve and enjoy! 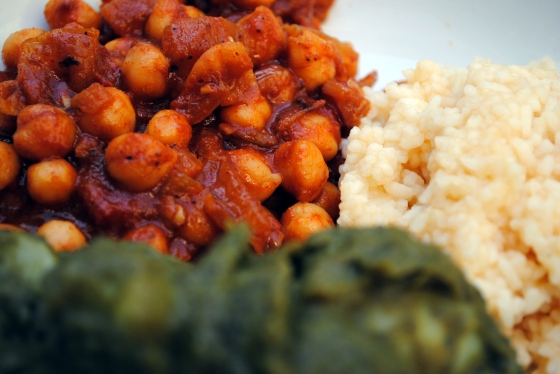 Allo Palak (adapted from this recipe)

Boil peeled and cubed potatoes until done. Heat 2 tablespoons of butter over medium-high heat. Cook spinach, garlic, onions, jalapeno, ginger until onions are soft, about 10 minutes. Once soft, remove from pan, place in blender and blend into a puree.
Heat remaining butter in pan, add cumin and heat until fragrant. Add spinach mixture and simmer for a few minutes. Stir in potatoes, garam masala, coriander and a dash of broth if needed. Simmer for a few minutes to let the potatoes absorb the flavor.