A while ago I read about Pillsbury coming out with a line of gluten-free doughs. As much as I love making my own doughs, I wanted to test out the doughs and see how they held up to my own. My first test was with their thin crust pizza dough. It’s hard to find a good gluten free thin crust pizza and I’ve yet to find a gluten-free one that is on par with gluten filled dough.

Straight out of the oven, the crust was great. Super thin and crunchy. I have never had a gluten-free pizza crust get this crispy before. After a few minutes, the quality of the crust went down hill. The pizza turned rock hard, almost to the point of being too hard to even eat. With the leftovers, it was probably the one time I was happy to zap the pizza in the microwave so the crust would soften up a bit. This was my first time using this dough, so it could be entirely my fault for rolling it out too thin. I will definitely buy the dough again in the future because the convenience is nice, but I might leave the dough a bit thicker next time and see how it fares.

The toppings on the pizza were absolutely delicious. This was more of a ‘clean out the fridge’ kind of meal than a planned recipe, but it made for a great lunch. The caramelized onions can be a time consuming addition to the pizza, but caramelized onions make everything better so I think they are worth the effort. I wanted to get a bit more color on the goat cheese, but as you can see the crust was already quite brown, so I decided not to risk burning it.

Disclaimer – I wasn’t compensated in any way for this post. I just like trying out new to me products and thought I would pass along my thoughts. 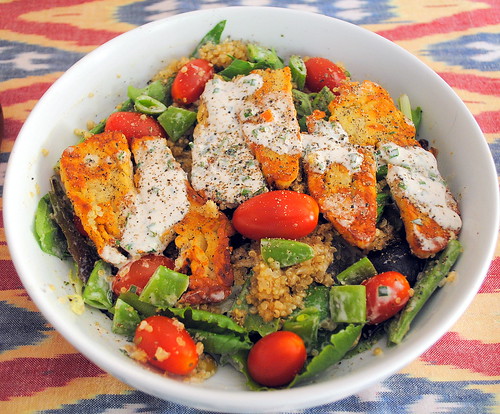 I’ve been on a bit of a halloumi kick lately. Normally I would feel bad about sharing recipes with ‘exotic’ ingredients in them, like halloumi, but now that Trader Joe’s now sells this amazing cheese, I would hardly count it as exotic anymore.

This salad is not only quick and easy to make, it is delicious too. The snap peas and tomatoes around here are absolutely delicious at the moment. Their sweetness combined with the salty halloumi help makes every bite delicious. The dressing is light and flavorful. It really adds to the salad and helps all the delicious flavors come together. 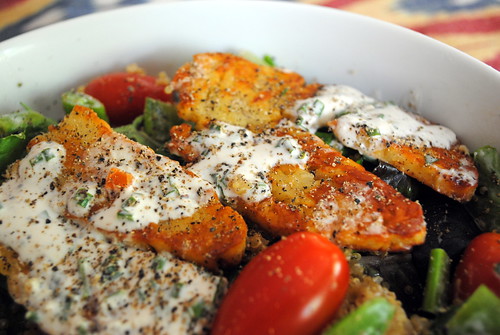 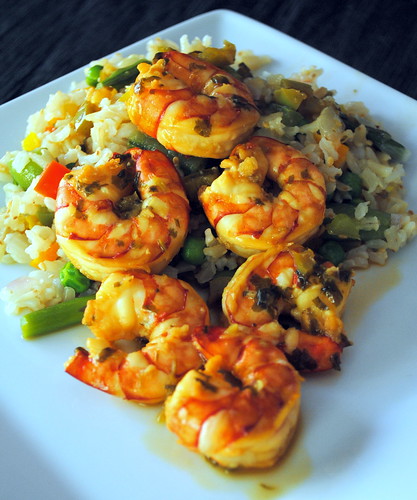 Sticking with this week’s loosely Asian inspired theme, this is a fairly quick , easy and very delicious recipe.

The shrimp stir-fry makes for a quick meal and is great for a weeknight meal. These shrimp are absolutely delicious. I thought the shrimp and their sauce was the perfect topping for the fried rice, but noodles or even a salad could work just as well. I used this recipe to clean out my vegetable door. I just used whatever I had on hand, but you can use any veggies you want. 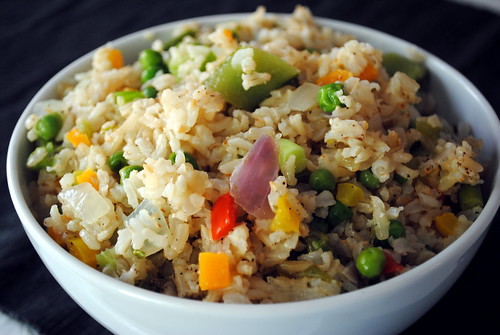 For the Rice:
For the Shrimp:

For the Rice:
For the Shrimp: 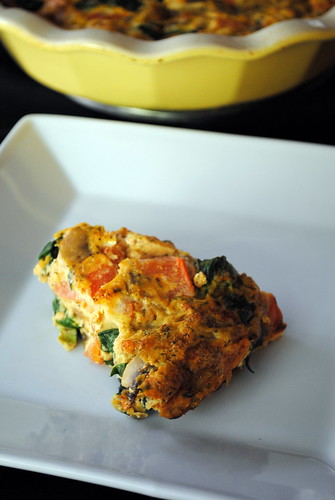 This week I am sharing some of favorite brunch recipes. I absolutely love brunch and summer weekends seem to just demand them. These recipes don’t demand too much cook and can mostly be prepared ahead to time, which gives you more time to relax, enjoy your weekend and enjoy some extra mimosas with your friends.

This frittata is pretty much perfect if you ask me. It’s easy to make, it can help you clean out your vegetable drawer and it reheats wonderfully. I just used the vegetables I had on hand, but you can add just about anything you want to this frittata. Broccoli, bell peppers, jalapeños or fresh herbs, like basil or chives, would all be great additions. 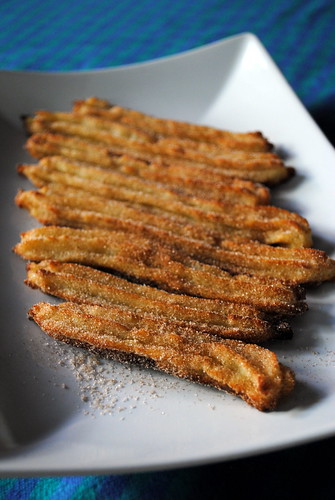 Make these! Make them right now! You need these in your life and you don’t even need to use cinco de mayo as an excuse. these are good enough to any time! I can’t tell you how many years it’s been since I had a churro, but they were one of my favorite childhood treats. The second I bit into one of these gluten free churros, I instantly had delicious memories of fairs and fiestas and trips to Disneyland.

I was actually shocked by this recipe. One, it was so easy! SO easy. And two, so delicious. Like, sugary, buttery, melt in your mouth, you never want to eat anything else every again delicious. I am always a bit wary of attempting to make desserts with French names and since the pastry used to make churros is choux pastry, I wasn’t feeling super confident going in. Luckily, I was proven wrong! choux pastry could not have been easier to make. Plus, baking the churros not only makes them a bit healthier, but takes care of a lot of the mess and work frying causes.

This recipe made a lot of churros. I got just over 40 mini churros out of this recipe. I was having piping bag issues, so I only made my churros about half the length of the baking sheet, which I think turned out to be the perfect size. 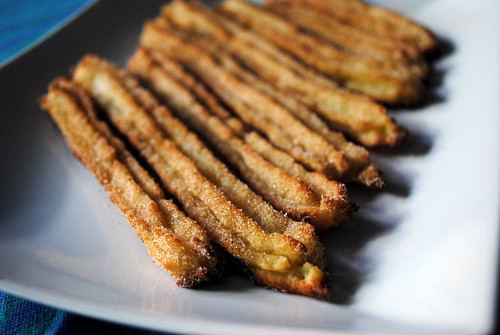 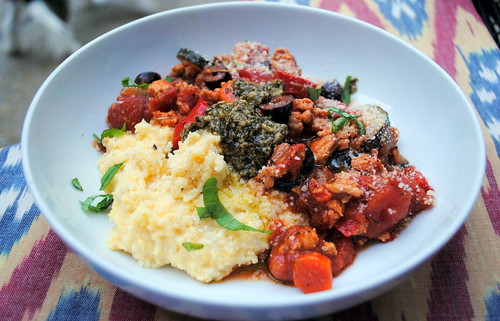 This dish is pure comfort food if you ask me. It’s hearty enough for a cold winter’s night, but still light enough to be a great transitional meal when spring hasn’t quite decided if it wants to be hot or cold yet. The meat and vegetables make it both filling and nutritious. You will get a lot of leftovers out of this recipes, which is a plus in my book. I also thought that the ragout tasted even better then next day.

Polenta is not everyone’s favorite food, but I happen to really like it. I think it makes a great base for a meal and keeps amazingly well for leftovers. You can top it with just about anything. I really like making my polenta with added goat cheese. It gives it both a creamy and tangy bite that I think goes really well with tomato based sauces.

For the Turkey Ragout: 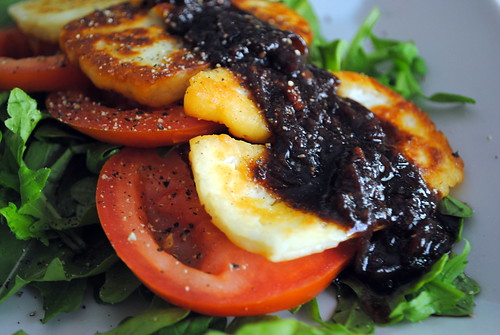 I’m not going to lie, making the dressing is going to take you a bit of time. To get really delicious, rich, sweet caramelized onions, you are going to need about an hour. Don’t believe anyone that says it will only 10 to 20 minutes, that’s a lie. And don’t believe anyone that says you can add sugar to caramelize them, that’s just gross. (I am very passionate when it comes to caramelized onions and these two points, if you couldn’t tell….) The onions will get naturally sweet and it is definitely worth the effort, you just need to give them time. You can definitely blend the onion dressing in a food processor if you prefer a more vinaigrette-like dressing. I left the onions un-blended (more like a chutney almost) because I felt it would make for a heartier salad. 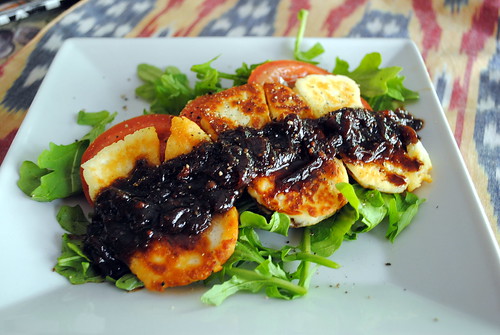 For the Salad:
For the Dressing: 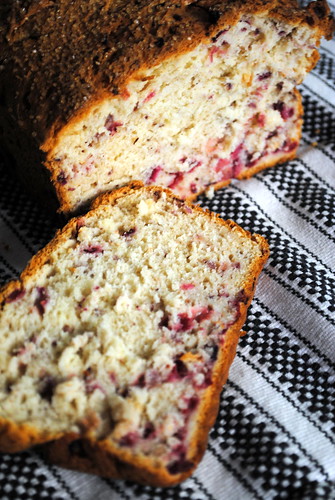 I found a sad little bag of leftover frozen cranberries in my freezer the other day. I always freeze cranberries in the fall with the best intentions of using them sometime soon, but they always seem to end up hidden under everything else. I felt bad for these cranberries and wanted them to feel loved, so I baked them into a delicious bread. If baked goods don’t say “love,” I don’t know what does…

This recipe is pretty perfect. It’s fast, simple and delicious. I found the batter to be quite thick and it kind of smothered all my cranberries to the bottom of the baking pan. I will admit I got a little sick of the time it was taking to chop each individual cranberry in half, so I kind of just started hacking them up. Bigger pieces probably would have helped with more uniform berry dispersion. Every slice did have a lot of berries, they were just clumped on the bottom, which is not the worst thing. Next time, I might try substituting some of the milk for orange juice and adding some zest to make a delicious orange cranberry bread.

Gluten-Free Cranberry Bread
Recipe from Gluten Free on a Shoestring. 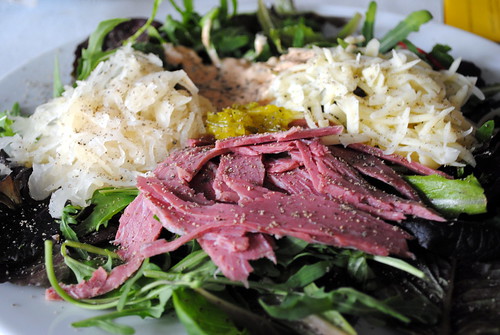 Well, I am off on a trip today and I’m quite excited about it. Most might associate the Reuben Sandwich with New York City, but according to the internet, the Reuben originated in the wonderful city of Omaha, Nebraska, which is where I am off to! One of my best friends moved to Omaha last year and since I am always up for an adventure, I decided Nebraska would be the perfect spot for my spring break!

One of my favorite things about traveling, is trying the local cuisine and specialties. I am fairly certain I have never actually had a Reuben sandwich and since Rye bread is not gluten-free, I probably never will, but luckily you won’t even miss the bread in this salad. I was actually kind of surprised by how well this salad turned out. I was a bit wary of adding sauerkraut to a salad, but in the end I think it was my favorite part. I made my own Russian dressing as well and while it was very tasty, on its own it turned out a bit sweet for my taste. With the salad however, it did go quite well with the sauerkraut and pickles. Due to my prolong stint living in Eastern Europe, I have to absolutely love anything pickled and dill pickles and sauerkraut are two of my favorite foods. If you aren’t so big on those, this might not be the salad for you, but if you love a good Reuben sandwich this will be right up your alley. 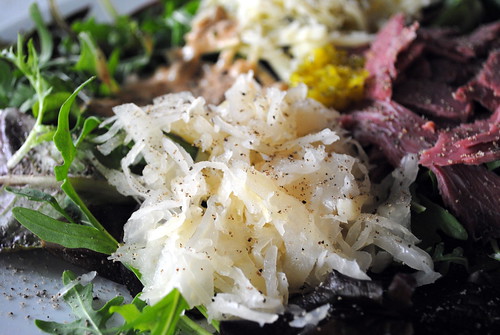 For the Russian Dressing
For the Salad

This is by far the easiest gluten-free dessert I’ve ever made! Almost easier than opening a prepackaged mix. You only need two dishes to make this; a mixing bowl and a baking pan and you are ready to go. Start to finish, your cake will be ready in under 45 minutes!

I tried to cut down on the sugar since 1 cup seemed like a lot. I started adding it 1/4 cup at a time. I’m not sure if it was the cocoa powder or the gluten-free flour, but found that I definitely needed the whole cup. This cake is extremely rich and chocolatey. I ended up freezing about three-quarters of the loaf (I made mine in a loaf pan, not a cake pan). The slice I’ve defrosted since was just as good as the freshly baked. I think making this recipe into cupcakes, might make freezing a bit easier.