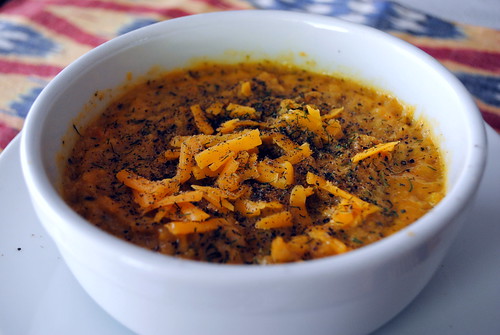 In another round of my second favorite kitchen game*, clean out the fridge roulette, I was lucky enough to come up with a winner! I am sure I am not the only one to do it, but sometimes you buy some vegetables and then kind of forget about them for a week . I always feel awful if I don’t rediscover them until after the use it or lose it stage, but luckily I found a kind of wilted bunch of broccoli, a cauliflower that was about to cross to the dark side and some lonely looking carrots.

I like to let my onions get nice and brown (preferably caramelized) in most of my soups, so I diced up the onion and shallot and threw them on first thing. I let them get soft and caramelized while I chopped and washed the rest of the vegetables. I don’t mind my veggie soups having a bit of a bite in them, but if you prefer a softer or more blended soup, you might want to add the carrots with the onions so they get super soft. I added them after the onions were well softened and thought they came out perfectly. Truth be told, I used less stock than usual (3 cups instead of my usual 4) because that what I had left on hand and didn’t feel the need to open or make more. This resulted in a much thicker, almost chowder-like soup, which was delicious and filling.

I topped my soup with a sprinkle of cheddar, freshly ground black pepper and a sprinkle of dill. After tasting the dill with the soup, I wish I had added some to the main recipe. Next time!

* – my favorite kitchen game is Don’t Cut a Finger While Cutting Onions, but I’m really not all that good at that. 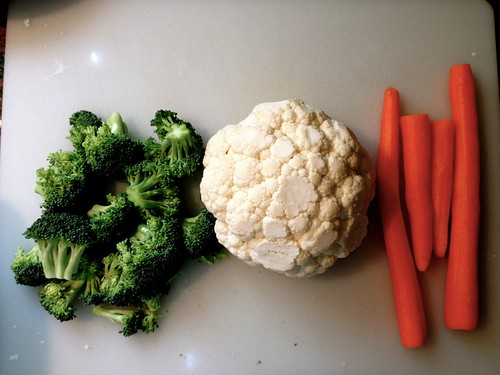 I got the idea for this soup from Frugal Feeding. Cauliflower, broccoli and leeks are all among my favorite vegetables. I used to be fairly neutral towards cauliflower until I started roasting it. I am fairly certain roasting makes just about anything better. If the soup is looking a little more white than green, that might be due to the fact that  a lot of the broccoli disappeared somewhere after roasting and before entering the soup pot.  Roasted broccoli is probably in my top 3 favorite vegetables. It would have been rude not to sample some, and like I said, roasting makes everything better.

I was tempted to try to make this with a melted cheese crouton on top, but since gluten-free bread is so incredibly temperamental, a piece of toast with some Boursin seemed like a much safer bet. Apart from the cheese on the bread, the soup is entirely vegan.  I ended up having a lot of soup left over, so I ended up freezing the rest. I’ll report back on how it serves up after defrosting when I get around to eating it.

This is pretty much Chicken Alfredo without any noodles involved. I’m not a pasta fan, so it was pretty much perfect to me. I was a bit hesitant to use evaporated milk. I know it’s real milk with some of the water removed, but shelf stable dairy products just weird me out. Once I got over the canned milk thing, I was really, really impressed by this dish. It was so easy to make and super flavorful. I did add some extra spices by sprinkling the chicken with Kosher salt, black pepper and garlic powder. That definitely helped the dish. Next time, I think the only other thing I would add would be some Dijon mustard. I really think that would have enhanced the flavor even more. And I might add broccoli as well just to add some extra color and vegetables. The spinach was really good in this dish. I thought it might be kind of gross since it was added at the last-minute before baking. This recipe is great as is, but a few easy additions

A quick note about serving: I think it would be easier to do this in one large casserole dish or in 1 cup ramekins. I followed the directions and a 2 cup serving dish was the size of a cereal bowl, which is a lot of food. I think a 1 cup ramekin would be the perfect size accompanied with some extra veggies or a salad.

I am obsessed with this salad. o b s e s s e d . Everything about it is practically perfect.  I’ve made this salad 3 times now and I just love it more and more each time. The vegetables are crispy and a bit cheesy, but still stay nice and fresh. The dressing is very lemony. I don’t mind the acidity at all, but I think it could be overwhelming to some. This problem could be solved by easing off the lemon a bit and adding a bit of honey to the mix. This salad is perfect as a light meal or it would be really great with a light salmon or chicken dish.

Aloo Gobi has always been one of my favorite Indian dishes. It’s usually thought of as a side dish, but it’s a proper curry in it’s own right. The combination of cauliflower and potatoes might seem a bit bland at first, but the spices really bring together a tasty dish.